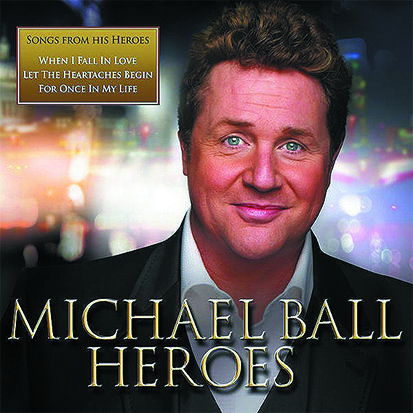 As you’d expect from the title, Heroes is, as Michael explained in the sleeve notes, “the album I’ve wanted to make for some time – it salutes/honours some of my all-time musical heroes”. As a result there are so many fine choices to enjoy here, spanning favourites like the Tom Jones anthem ‘I’ll Never Fall In Love Again’, Elvis Presley’s ‘I Can’t Help Falling In Love With You’, Billy Joel’s ‘New York State Of Mind’, Frank Sinatra’s ‘Summer Wind’ and Neil Diamond’s ‘Play Me’.

These sit alongside marvellous renditions of Long John Baldry’s ‘Let The Heartaches Begin’ and Scott Walker’s ‘Joanna’. Arrangement wise, Michael doesn’t stray too obviously from what went before, but the production and work the musicians put in still make this sound very much like a Michael Ball album. Also, the closing duet of ‘Avenues And Alleyways’ with Tony Christie is absolutely superb.