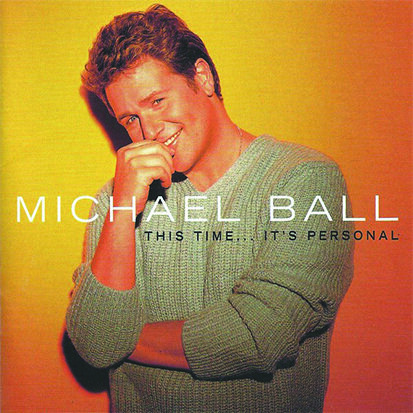 It’s fascinating to note that despite the fact the majority of fans discovered Michael via his array of Musical Theatre roles, when it comes to his albums, the ones that frequently get mentioned are the ones comprised of music almost entirely from outside the theatre world. One of his most enduring releases is This Time It’s Personal, where Michael selected songs that meant a lot to him.

This was really the first album where Michael was able to properly display his fondness for Country songs, where he tackles Garth Brook’s ‘If Tomorrow Never Comes’ and Shania Twain’s ‘Still The One’ with spectacular results. The more heartfelt numbers arrive in the form of ‘The Greatest Man I Never Knew’ and especially ‘The First Time Ever I Saw Your Face’ which is stunning.

There’s upbeat fare with the likes of ‘Walking In Memphis’ and a great version of the Texas hit ‘I Don’t Want A Lover’. On top of that, we saw the first real glimpse of what was to come, with ‘Just When’ and ‘Never Coming Back’, a pair of songs Michael wrote with his friend Brian Kennedy. While he may play down his earlier songwriting efforts, these two tracks have aged very well and remain popular with the fans.