We’re Gill and Maureen and we founded the official worldwide Michael Ball Fan Club in April 1992. We started off as fans of Michael’s ourselves and got to know him when he was appearing in Phantom of the Opera in London. The fan club has just celebrated its 29th anniversary in 2021 and our membership spans the world with members from all over Europe, USA, Australia, New Zealand, Canada, Hong Kong and South Africa to name but a few. 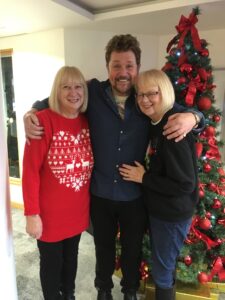 Our aim is to keep fan club members up to date with information concerning Michael’s activities as well as providing a means for fans to keep in contact with each other. We are always being asked about what is involved in running the fan club – it’s difficult to put into words as no two days are ever the same. Basically, it means we have to have excellent administrative skills as well as being up to date with technology to make sure the fan club keeps pace with social media such as Facebook, Twitter and Instagram, plus answer queries via email and Facebook.  We also produce in collaboration with James Gaden a twice-yearly magazine called “On The Ball” which can either be read online or purchased as a hard copy.

We have also organised fan club Events, which are an opportunity for members to get together and talk about their favourite subject. On 27 June 2002 we held a big 40th birthday party for Michael at Equinox discothèque in Leicester Square in London. It was attended by 700 fans and Michael came along to a rapturous welcome before most of us headed off to see him in Chitty that evening.

The next three Events were held at the London Ibis Hotel in Earls Court, where hundreds of fans enjoyed a day out participating in quizzes, competitions etc. In 2012 the Event was held to celebrate the fan club’s 20th anniversary and Michael’s 50th birthday and it was attended by over 400 fans.

One question we’re frequently asked is “How did you come to be running the fan club?” Well, it’s a simple story really. Having followed Michael’s career from Phantom, through Aspects in London and Broadway, on his return from New York we found it difficult to keep track of what he was doing, relying on Michael’s father keeping us informed. Eventually we suggested running a fan club and our timing was perfect as unbeknown to us, Michael had just agreed to do the Eurovision Song Contest and undertake a UK tour, which would launch him into much greater fame. After some negotiations with Michael and his management team at the time, agreement was reached and we contacted fans that we knew. In the first six months over a thousand people joined the club – we had no idea there were so many fans at that time! 29 years on and we’re still here, going strong, having taken on many changes along the way. Oh yes – in case you hadn’t guessed – we are sisters!

CHRIS
Chris is our Webmaster and deals with all aspects of administration relating to the internet. He helped to design our very first web page in 1995 at the tender age of 12! Since then he has learned a lot about website design and has enjoyed coming up with new ideas for the site, with a little help from his childhood friend Joe. Chris’s favourite food is Chinese, KFC and McDonalds, Dominos…. well anything really!

IVY AND HARRY
We can’t leave out our dear parents who have now both passed away. They were an inspiration to us and without their encouragement for us to believe in ourselves, we wouldn’t have achieved nearly as much as we have in our lives, including running this wonderful fan club.

COLIN AND ROY
As most of you know these are our long suffering husbands – not really, they enjoy it all as much as we do. They are unpaid chauffeurs, tea/coffee makers, errand boys etc. Aren’t we lucky to have such a pair?! They both have diverse hobbies – Roy will collect anything and everything, from petrol cans to watches and many examples of his collecting can be found in Maureen’s home! Colin’s hobby is doing radio programmes for the internet radio station ABC Oldies.

PAT WEBB
Quite a few years ago Pat agreed to take on the task of representing our USA fan club members, who make up the largest proportion of overseas members.

Don’t forget to visit our very active Facebook group which can be found at https://www.facebook.com/groups/michaelballfanclub and join in the discussions.