Michael was born in the West Midlands on 27 June 1962. He trained at the Guildford 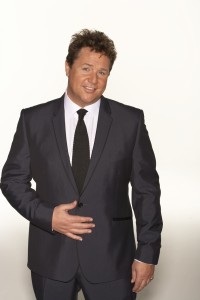 School of Acting and graduated in 1984. His first professional appearance was in Godspell in Wales. His first major break was a star part in the production of The Pirates of Penzance at the Opera House, Manchester.

Michael’s West End debut followed in Les Miserables, which was swiftly followed by Phantom Of The Opera and Aspects Of Love.

In May 1992 Michael represented the United Kingdom in the Eurovision Song Contest, with the song One Step Out Of Time. He finished in second place.

Following his success in Eurovision, Michael undertook several major tours of the U.K., followed by The Michael Ball Show, his own TV show.

Michael’s success then continued with a successful run in the show Passion at the Queens Theatre in London, followed by another UK tour.

1997 saw Michael perform at two open air concerts at Bedford and Barnstaple, and he also toured again in the Autumn culminating in an 11 night season at the Blackpool Opera House.

In 1998 Michael performed in several concerts, including open air at the Chelmsford Spectacular and with the Royal Liverpool Philharmonic Orchestra at the Liverpool Summer Pops Concerts. He also released the album “The Movies”.

1999 was another very hectic year for Michael, being voted the Royal Variety Club’s Best Recording Artist in February and undertaking a UK tour in March/April followed by his first solo concert outside the UK at the Theatre Carre in Amsterdam. He then proceeded to appear at open air concerts at Hampton Court, Castle Howard, Glamis Castle and Longleat before finishing his tour in September in Belfast and Dublin.

2000, and the turn of the century saw Michael performaing in Malaysia. He then appeared as a guest star at a Michael Le Grand concert in February. He undertook a full UK tour in September.October and released a new album “This Time It’s Personal”.

2001 saw Michael continue his busy schedule. He performed in concerts at Harrogate, Liverpool, Audley End and Chelmsford, as well as performing a sell-out season at the Donmar Warehouse in London. “Centre Stage” – a collection of songs from musicals was released on 17 September and to round off the year he played several concert dates.

2002 saw Michael concentrating on his role as Caractacus Potts in Chitty Chitty Bang Bang as well as perform at 3 outdoor concerts in the summer. Michael continued in this role throughout the first half of 2003. In October Michael released his album “A Love Story” and undertook a highly successful nationwide UK tour.

2004 was another busy year for Michael. He completed a hugely successful Australian tour, and scored a resounding success performing the role of Joe Gillis opposite Petula Clark in a concert version of Sunset Boulevard in Cork for BBC Radio 2. In May he performed at the Abravanel Hall in Salt Lake City, United States of America. In September he performed his one man show “Alone Together” at the Singular Sensations season at the Theatre Royal Haymarket and then went on to perform in front of the Queen and President Jacques Chirac at Windsor Castle where he played the role of Jean Valjean in “Les Miserables”.

Michael continued his hectic schedule in 2005, performing the role of Count Fosco in Andrew Lloyd Webber’s “Woman In White” in London and then undertaking a full UK tour in May/June. He then left the UK for New York, where he played the role of Reginald Bunthorne in Gilbert and Sullivan’s “Patience” for the New York City Opera. To finish off the year he reprised the role of Count Fosco for the Broadway production of “Woman In White”.

2007 continued to be busy, with a full UK tour in March/April, recording another series of Ball Over Broadway for BBC Radio 2, winning £64000 for charity on “Who Wants To Be A Millionnaire?” and performing at several open air concerts including the Faenol Festival. Michael appeared with the English National Opera in it’s summer production of Kismet, and then made history by appearing in his own “Prom” at the BBC Proms Festival at the Royal Albert Hall. The second half of the year has proved to be equally busy, with the release of his CD “Back To Bacharach”, his DVD “One Voice – One Special Night Live”, culminating with the wonderful triumph of playing Edna in the musical Hairspray – a role that continued into the next year.

2008 was yet another busy year for Michael, continuing in the role of Edna in Hairspray 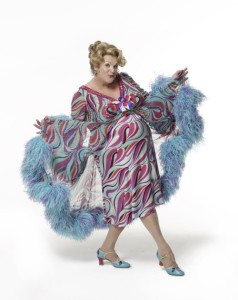 and performing at concerts at Hampton Court, Liverpool, Kenwood House, Audley End and Patchings Art Centre. In March Michael won the Olivier Award for Best Actor in a Musical for his portrayal of Edna Turnblad in Hairspray. Michael then added another string to his bow by joining the BBC Radio 2 team for his regular Sunday morning slot “Michael Ball’s Sunday Brunch”.

2009 saw Michael continuing in the role of Edna in Hairspray, temporarily hanging up his dancing shoes and “boobs” on Saturday 25 July 2009. He celebrated his birthday on 27 June by performing at an open air concert at West Wycombe Park. To commemorate 25 years of being in show business, Michael released an album called “Michael Ball, Past and Present”, a celebration of the past 25 years. He toured the UK in September/October, which was filmed at the Royal Albert Hall and released as “Michael Ball Past and Present Live”. In December he performed a show at Feltonfleet School to raise funds for Shooting Star Children’s Hospic.

2010 saw Michael reprising his role as Edna in the UK tour of Hairspray, as well as continuing to work for BBC Radio 2, sharing the Sunday morning slot with Sir Terry Wogan. Michael was given his own TV series on ITV1 running for 6 weeks Monday-Friday from 16 August.

2011 and Michael continued his busy life, finally saying goodbye to Edna in Hairspray, undertaking a full UK tour, continuing to do his BBC Radio 2 radio show, and appearing in Sweeney Todd in Chichester. 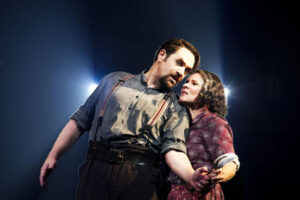 September. He hosted the Olivier Awards with Imelda Staunton at the Royal Opera House and made various TV and radio appearances, including hosting Friday Night Is Music Night on BBC Radio 2 in October. He appeared at the Cork City Hall on 8/9 December, and at the BT Christmas Concert at the Royal Albert Hall on 13 December.

2013 saw Michael returning to BBC Radio 2 for a brand new show called Sunday Night With Michael Ball at 7 pm on Sunday evenings which started from 20 January.  His album “Both Sides Now” was released in February and he undertook a full UK tour in April/May 2013. Michael then went on to perform at open air concerts at Audley End and Kenwood.  He also appeared in concerts in Abu Dhabi and Shanghai, as well as appearing at a concert celebrating Don Black’s music and on a P and O cruise.  In December Michael 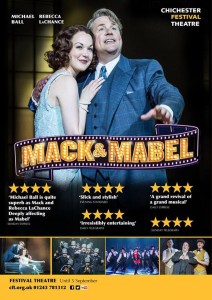 2014 – Michael began the year by filming with Imelda Staunton for a TV musical film written by Victoria Wood called Tubby and Enid which was screened to great critical aclaim at Christmas 2014.  He made numerous appearances during the year,  including Tapei in March and then at the Lytham Proms later in the year, as well as continuing with his Sunday Night With Michael Ball radio show in BBC Radio 2.

taking on the role of Mack Sennet in Mack and Mabel at Chichester Festival Theatre.  In June he was awarded an OBE by Her Majesty The Queen in her birthday honours list.

2016 – In January Michael performed an intimate concert at the London Hippodrome and also collected his OBE from Prince Charles.  He also hosted the Olivier Awards and was honoured to be chosen to host Sunday Morning radio after Sir Terry Wogan passed away in January 2016.  In the latter part of the year, Michael teamed up with Alfie Boe to produce the album “Together” which went platinum and was the Christmas No. 1 album.  They undertook a nationwide UK tour in November/December.

2017 – Michael and Alfie release their second album called “Together Again” which again reached No. 1 in the album charts.  They performed at outdoor concerts and completed a UK tour at the end of the year.  Michael continued to host his Radio 2 Sunday morning show.

2018 – Michael and Alfie won the Classic Brit Award for Group of the Year and Album of The Year.  He performed the role of Anatoly in the ENO’s production of Chess at The Colisseum in London. Michael also participated at outdoor concerts in the summer as the special guest of Il Divo. In September he once again hosted the BBC’s Proms In The Park in Hyde Park London.

2019 – Michael continued to present his Radio 2 show every Sunday morning between and 11 am and 1 pm. He toured the UK in April/May 2019, then went on to appear as Javert in the Les Miserables Staged Concert at the Gielgud Theatre in London.  He released his solo album Coming Home To you, and then also released Back Together with Alfie Boe.

2020 – Michael toured with Alfie during February and March,  Alongside Captain Sir Tom Moore, Michael topped the singles charts with their rendition of “You’ll Never Walk Alone”.  Michael and Alfie have recorded a new album called “Together at Christmas” released November.  This album flew straight to the top of the album charts and has since been awarded a gold disc for sales. He continues to present The One Show periodically and can still be heard on BBC Radio 2 every Sunday between 11 am and 1 pm.

2021 – Michael reprised his role as Edna in Hairspray at the London Collisseum which finally commenced in June 2021.  July saw the premiere of “Wonderful Wales with Michael Ball”, a four episode series on Channel 5 exploring Wales.  Michael and Alfie Boe undertook an arena tour in November/December.  Michael can still be heard every Sunday between 11 am and 1 pm on BBC Radio 2.

2022 – Michael appeared at Warners Leisure centres in February/March before appearing in his own BBC Wales TV show “Michael Ball Showtime”.  He also announced a charity fundraising concert in aid of Shooting Star Children’s Hospices at the London Palladium on 11th June 2022 and also appeared at outdoor summer concerts with Alfie  Boe.  He had another booking for a Sailcation with Imagine Cruising and then a trip to Australia in September to take part in “Do You Hear The People Sing?”.  Michael is still presenting his BBC Radio 2 programme every Sunday between 11 am and 1  pm.  Michael’s first novel “The Empire” was released in October.  The “Together In Vegas” album is Michael’s latest collaboration with Alfie Boe.